Four years in the making, the critically acclaimed 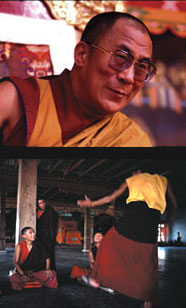 Part 1: The Dalai Lama, the Monasteries and the People

Filmed in the Dalai Lama’s residence in Dharamsala, North India, and in the re-built Sera Monastery, the second largest monastery of the old Tibet, this opening part of the Trilogy observes the Dalai Lama in his dual role as political leader and spiritual teacher. In an elegant cinematic style, at one with its subject, the film interweaves this personal portrait with an intimately observed exploration of the ways in which the inner knowledge of Tibetan Buddhist culture is developed in the monasteries, through vigorous debate and solitary meditation, and communicated in to the lay community.

With extraordinary authenticity Part II of the Trilogy journeys deep into the mystical inner world of monastic life. Set in the ancient village of Boudha, Nepal and the isolated mountain caves of the yogis, the film follows the lamas of the Phulwary Sakya Monastery through their contemplative retreats, the building of an intricate cosmogram, and the performance of an ancient protective ritual known as ‘A Beautiful Ornament’. Through the ritual invocation of the female deity Tara, the malevolent forces that might bring harm to the society are invited and magically transformed. With a subtitled commentary based on the teachings of the great 20th century master Dudjom Rinpoche, the essence of tantric Buddhism is powerfully revealed. 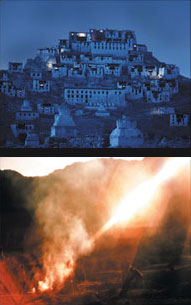 Part III: The Fields of the Senses

Set in the majestic mountain landscape of Ladakh, Part III is a meditation on impermanence and the relationship between the mind, body and environment. It follows the monks and farmers through a day, ending with an unflinching depiction of the monastery's moving ritual response to a death in the community. As in the Tibetan Book of the Dead, the departed is guided through the dream-like intermediate state between death and birth.