Four years in the making, the critically acclaimed

Note from the Director 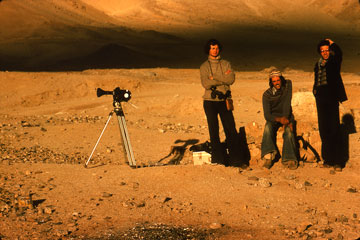 In making the Trilogy, we were searching for an immediacy, intimacy and unobtrusiveness, which had been so masterfully achieved in such classic documentaries as Robert Flaherty’s ‘Nanook of the North’ and the films of Fred Wiseman. We were trying to allow the Tibetan way of life to speak directly to the audience. At the same time, as a film-maker, I had always admired the cinematic skills of Kenji Mizoguchi and, whilst I knew that I could never achieve such artistry, his visual style was a constant inspiration. Above all, we hoped that the film would draw the audience into the spirit of the Tibetan way of life, into its light-heartedness, openness and quietly powerful awareness of the sacred.

The origins of this project probably go back to my childhood. I was brought up in Luxor, the capital of ancient Egypt, where my father worked as an artist for an archaeological expedition. I had always wondered what kind of a society had created such vibrant, monumental temples and elegant, deeply peaceful art. Driven by this curiosity, I set out for India in 1974 and after traveling along the Himalaya from Kalimpong in the east, I settled in Dharamsala, where the Dalai Lama was in exile. The Dalai Lama was living a simple life at the top of the hill above the cottage where I lived. Luckily, in those days he had time to meet with wandering travelers such as me. He was immensely kind and during one of our meetings I told him of my grand ambition to make a film about the Tibetan way of life, the contemplative and sacred arts skills of the monasteries, and the Tibetan Buddhist way of helping the dying. He said that if I managed to organise everything, he would participate and help.

Not long after returning to England a friend introduced me to Sogyal Rinpoche, a young, exuberant lama, who had just arrived in England. A few days later I went to see Sogyal in north London and told him of my plans to make a film. He immediately offered to travel to India and to introduce me to the leading Tibetan masters of the time including: Dudjom Rinpoche, Sakya Trizin and the Karmapa. Then, one morning over breakfast, I told David Lascelles, a university friend with whom I was sharing a cottage in Somerset, about the planned visit to India with Sogyal. David was just starting a film production company and he suggested that this could be one of its first projects. So it wasn’t long before David, Sogyal and I left together for India and after further meetings with the Dalai Lama and meetings with many of the great Tibetan masters, now re-settled in India, Nepal and Sikkim, the plans were made for the making of the film which came to be known as Tibet: A Buddhist Trilogy.

A great disappointment upon the release of the film in 1979 was the preference by the cinemas to show parts I & III of the Trilogy in one two hour screening and part II on the following day in a second two hour screening. The audience never had the opportunity to see the film as it was intended. Now, our newly digitally restored, re-cut Trilogy runs in a single two hour fourteen minute screening. It was truly a joy to see the audiences at the re-mastered Trilogy’s recent London premiere experiencing the film’s unfolding journey in the right order! Even for me, who has seen the film so many times, it was a moving experience.